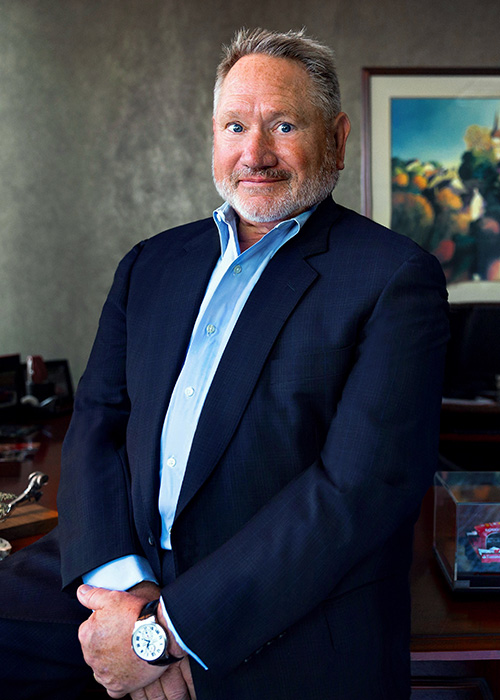 Steve established his financial consulting practice in 1983 and is a Certified Financial Planner® and a Certified Funds Specialist. During his time in the financial planning industry, Steve has held numerous industry-group leadership roles, written articles for various publications including U.S. News and World Report, and has been widely quoted in a vast range of financial publications. Steve was named by Registered Representative Magazine*, as one of the “Top 100 Independent Advisors in America”, named by Barron’s** as one of the “Top 1,000 Financial Advisors in America” and one of the “Best Wealth Managers in St. Louis” by Small Business Monthly Magazine.***

Steve’s deep sense of client responsibility is why he chose to be independent and not represent a proprietary product chain. By keeping his independence, Steve believes “my clients interests are best preserved and promoted.”

He is a leading authority in Retirement Distribution Planning, a planning process that helps retirees development investment and tax strategies to optimize their retirement wealth. Steve has been a guest lecturer on estate and financial planning at the University of Missouri — St. Louis and Webster University. He is one of the original faculty members at Enterprise Bank and Trust University, and he has been a featured guest on “Ask the Financial Planner” sponsored by KMOX Radio.

Steve was one of the early financial advisors who developed financial education in the workplace and has provided financial wellness programs to thousands of employees throughout the United States since the early 1980s.

He graduated from Drake University in 1976 and then studied finance at the University of Iowa from 1977-1980. He completed the Certified Financial Planner program in 1987 through the College of Financial Planning in Denver, Colorado and in 1995 he achieved the Certified Fund Specialist professional designation through the Institute of Business & Finance in La Jolla, California.

Steve’s wife, Lynn, who was active in the day to day operations of Four Seasons for decades is now retired. However, Lynn supports Steve as a loving spouse as Four Seasons continues its tradition of service first. Steve and Lynn value their time working together in a business partnership. “My parents were marital partners as well as business partners,” Steve says, “and it worked out well.” Steve and Lynn have two daughters that are happily married and three grandchildren. Steve finds it important to balance family while serving his clients through Four Seasons Wealth Management.

“Ever since I was a child I’ve been interested in American automobiles,” he says, adding that his father bought a new car every few years because he drove so many miles for business each year. This passion drove Steve to found a car club for Missouri and Illinois, which he ran for five years until he was nominated to the worldwide board. He then became president of the international club and ran that organization for two years.

Steve has served as a board member for three charitable organizations in St. Louis: Touchpoint Autism Services, Life Skills, and Easter Seals Midwest. “I’ve also been active with both the Make-A-Wish® Foundation and Pedal The Cause,” he says, “because I enjoy the challenge of being involved and serving charities that make a difference.”